American caviar reviews may be hard to come by. What’s the reason? It’s simple – there are not many American caviar reviews out there because there isn’t much American caviar! Today, most (sturgeon) caviar in the U.S. comes from China or Iran, and is redistributed in fancy tins that say “Paris” or “New York.” Although domestic farmed White sturgeon, Hackleback and Paddlefish roe has been around for a while, the originally Caspian-derived caviars like Osetra (from the Russian sturgeon), Beluga (from the Huso-Huso) and Baeri (from the Siberian Sturgeon), are being imported from farms in China and Iran. Until now. Osetra caviar from Russian sturgeon farmed in the U.S. is now being produced by Marshallberg Farm in North Carolina. Why don’t other farms raise Russian sturgeon? One good reason is because it takes almost 10 years of keeping the fish until they are ready for caviar harvest. Running a recirculating Aquaculture System can cost upwards of 1 million dollars per year (following U.S. environmental standards), so it makes sense to choose the other sturgeon types that take less time to yield profit.However, Osetra is one of the most coveted types of caviar, only rivaled by Beluga. If you’ve had Osetra caviar lately, it was most likely from China or Iran. China has virtually no environmental standards, and both imports are known to have borax added as a preservative. It’s also possible that Osetra caviar found in the U.S. is from poached Russian sturgeon from the Caspian Sea. 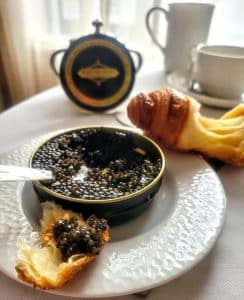 Classic Osetra
Excellent caviar! I used to have Russian Beluga caviar delivered by the kilo when I lived in Europe… This is just as good & no strange additives like borax and it’s made in the USA!! Excellent !!
Read more...
5
Excellent