Ossetra | Osetra … Pick a spelling, any spelling. This caviar comes from the one and only Russian Sturgeon. 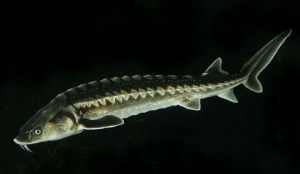 Ossetra (Osietra | Osetra | Oscietra | Asetra | осётр) caviar is one of the most prized and expensive types of caviar. Osetra varies in color from deep brown to gold. Golden Ossetra is very rare (and therefore more expensive), and some caviar connoisseurs claim it has an even richer flavor than the standard dark variety. Beluga is the only caviar ranked higher than Osetra, but is not commercially produced in the United States.

The word Ossetra (Osetra | Osietra | Oscietra | Asetra)  is the transcription of the Russian word “осётр”. This translates into English as sturgeon. The term “ossetra” once referred to the Russian sturgeon species harvested for this type of caviar. Today, Osetra refers to caviar made from the Russian sturgeon.

Different names exist for the species of sturgeon that live in various territories of Russia. The major species are Beluga (Huso huso), Sevruga (Acipenser stellatus) and Sterlet (Acipenser ruthenus). The name Ossetra (Osetra | Ossetia | Osietra | Oscietra | Asetra | осётр) corresponds to the species Acipenser gueldenstaedtii, which is much smaller than Beluga sturgeon (Huso hush).  Siberian sturgeon (Acipenser Baerii) is farmed all over the world because it begins to produce caviar faster than the Russian sturgeon (Acipenser gueldenstaedtii). However, Baerii is considered much lower in class than Osetra.

Marshallberg Farm, located in North Carolina is the largest producer of Russian sturgeon for Ossetra (Osetra | Osietra | Oscietra | Asetra | осётр) in North America. Osetra caviar from Russian sturgeon raised in the farm’s facilities in eastern and western North Carolina, can be bought directly from the farm. For more information or to buy caviar, visit the online shop. Thanks for visiting!

How to Serve Caviar How many calories in caviar?
MENU
0
0
Your Cart
Your cart is emptyReturn to Shop
Continue Shopping
Products you might like
Calculate Shipping